Here’s the old members book that remained pretty unchanged for the whole original clubs existence. Two founder membership cards have a similar look to them in blue and pink.

Just as in the new club, it also held a copy of the Puffin Code!

I can’t remember whether I mentioned it in a previous post – Jill McDonalds first big contribution to Puffin was of course the Puffin Logo/Badge itself. 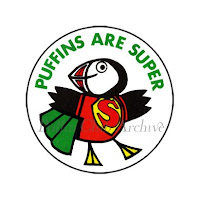 Isn’t he super! I’ve still got a a pile of these to post – hope you enjoy them. 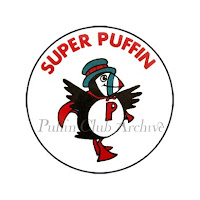 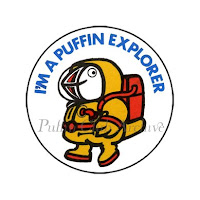 Yes, it’s a Puffin Explorer badge – one of the old ones. I’ve sadly mislaid one of the fifteen badges in this collection – it’ll probably turn up when I least expect it. Never mind, I’ve still got the rest of them to share with you all.

Again, these are the work of Jill McDonald. One of my earlier posts showed one of the designs used as a rubber stamp. All of these badges were given away at Puffin exhibitions in the late 70’s. 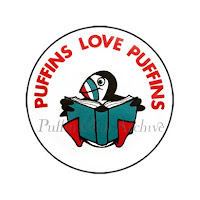 This is an example of the badges that followed Jill’s death – The work is very slick, and obviously follows Jill’s example, but it doesn’t quite reach me in the same way. If you are the illustrator, please don’t take offense! I’m a big fan of Jill’s work, and I may be a bit blinkered.

It’s a bright sparkly new year – and already I have to start with an apology! I know I said I would try to put some little ‘gifts’ up on the blog over the twelve days (and here we are on day twelve without so much as a Christmas doughnut!).

I do have an excuse. I was laid up with one of the many Christmas lurgi bugs that are doing the rounds at the moment – so I wasn’t full of Christmas cheer; more like Christmas congestion!
Anywho, I’m back for a year of vintage Puffinalia that sees the first new Puffin Post on the doormats of new young puffineers, eagerly ripping those membership boxes open to savour the contents (including their own fuzzy puffin).

Things may seem bleak out there at the moment, but it is warming to remember that the powercuts and financial worries that accompanied the winter of discontent all those years ago also had it’s Puffin Club to give an identity to the avid readers of the 70’s. Maybe not a lot has changed after all!

To make up for not posting the promised goodies over the festive season, please accept this offering: 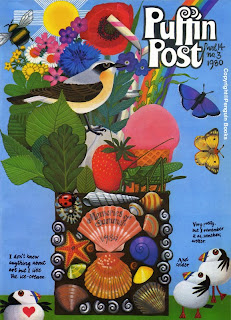 This is the cover to Puffin Post Volume 14 No 3 – Voted the best Jill McDonald cover by Puffineers following her death. It is very lovely!

For those that may be interested, Jill painted 219 puffins on the covers of Puffin Post in total (though I hesitate to collate the total for the contents as well (should one include reprints?!).