I am surprised and pleased to report that the BBC Radio 4 series, Great Lives, is honouring Kaye Webb.

I’m surprised as I would have thought that she would have been the subject long ago, but equally pleased that this is being rectified.

Kaye was nominated by old Puffineer Janet Ellis, the former Blue Peter presenter and author. Janet isn’t the only BBC R4 presenter to be an old Puffineer – Presenter and Comedian, Sue Perkins revealed that she too was a member during one of her last appearances on Radio 4’s ‘Just a Minute’ before she became the new host.

I was approached by the series producer to fill in some gaps about Kaye and the Puffin Club, although the biography ‘So much to tell’ by Valerie Grove has been of great help. So far, I don’t know if or who else is being brought in as part of the programme. As Great Lives is one of the few BBC radio series that don’t disappear from the BBC website after being broadcast, I will add a permanent link along with the Desert Island Discs programme that Kaye recorded – which is still available.

After a seriously long break, here is a copy of the first issue of Puffin Post. Creating an online version has always been the aim of this site:

I am looking for your stories and, if you have them, pictures about your time as members of the Puffin Club from it’s launch in 1967 through to its end in the early 1980’s.

I’m currently pulling everything together for a book to celebrate the Puffin Club in all its glory while us old birds can still remember it all. This is my thank you to the club as 2017 will see its fiftieth anniversary! 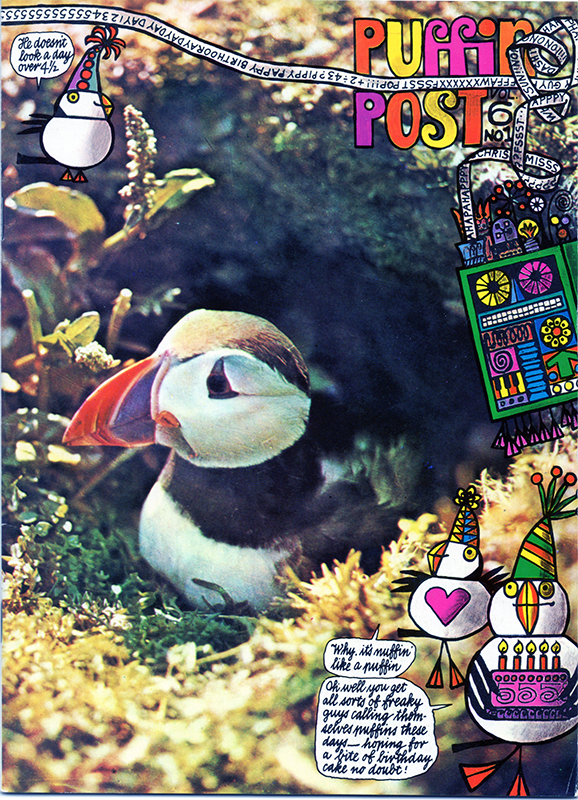 Despite the lack of a fifth (let alone a fourth) birthday celebration for the new Puffin Post, this is the photo-montage for the celebratory issue of Puffin Post by Jill McDonald. Something of a return to her previous use of photos and other material in conjunction with her unique and idiosyncratic artwork. 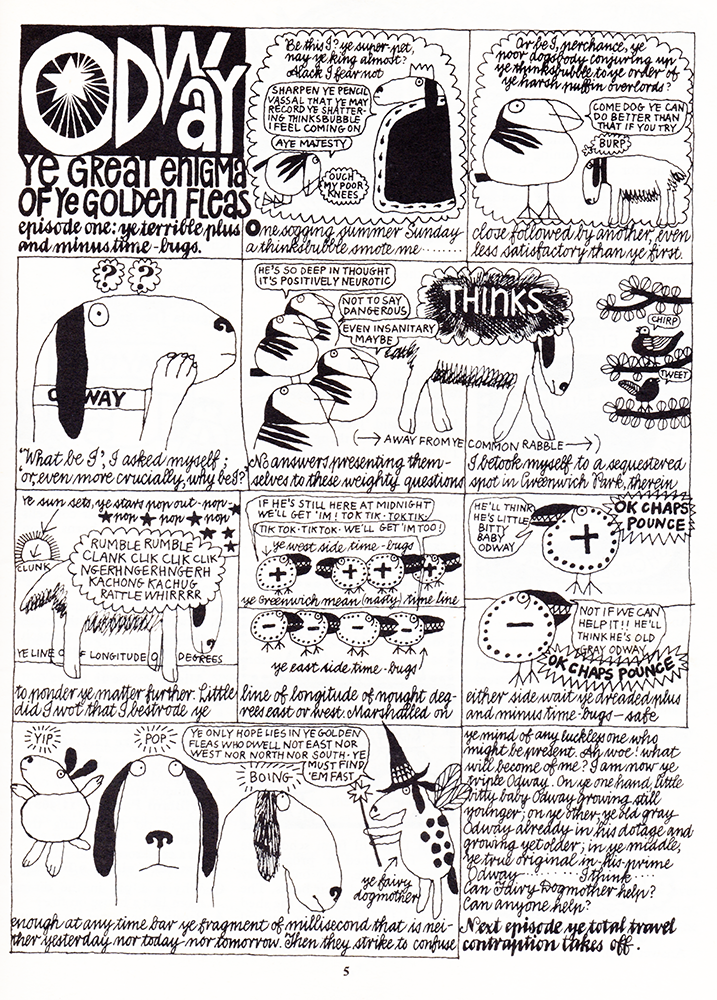 I have been away doing lots of other things, feeling safe in the knowledge that a Puffin Post/Puffin Club thing was out there for those that wanted it.

Sadly, I have just received the early Christmas card from the fab team at The Book People, who have been running and publishing the Puffin Post Club, and the news is that they will no longer be running it after Christmas.

Whether this means that it is going to disappear completely, or that Pearson (who own the Puffin brand) will take it on in-house, is not clear.

Despite the challenges of a book club for children in an age when they are increasingly print illiterate, I hope that it can still survive.

In the meantime, here is the first episode of the wonderful Odway strip by Jill McDonald. 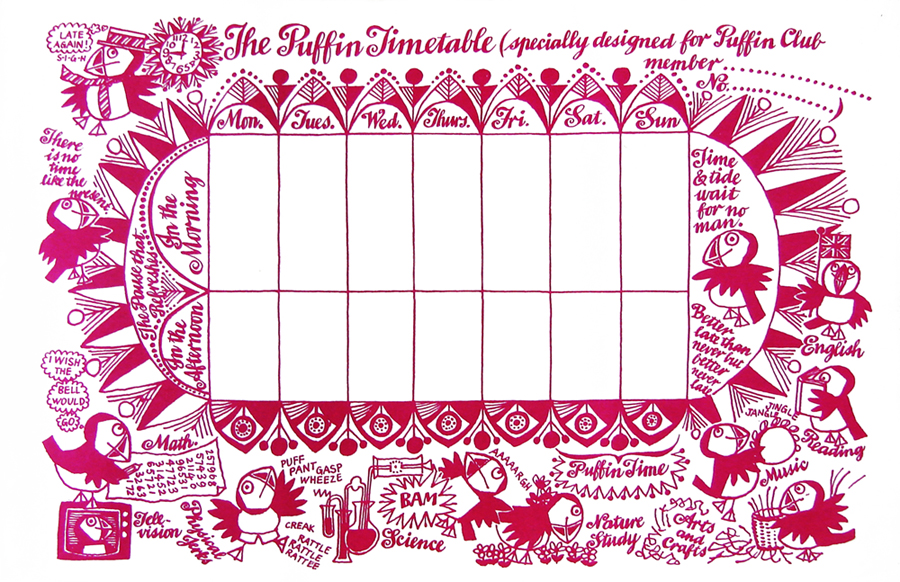 We all find it hard to work to a timetable – it restricts us and binds us, but this is a lovely one that was given away to Puffineers courtesy of the pen of Jill McDonald. Its only downside is that I would have hated to write on it and ruin its beautiful proportions and balance. 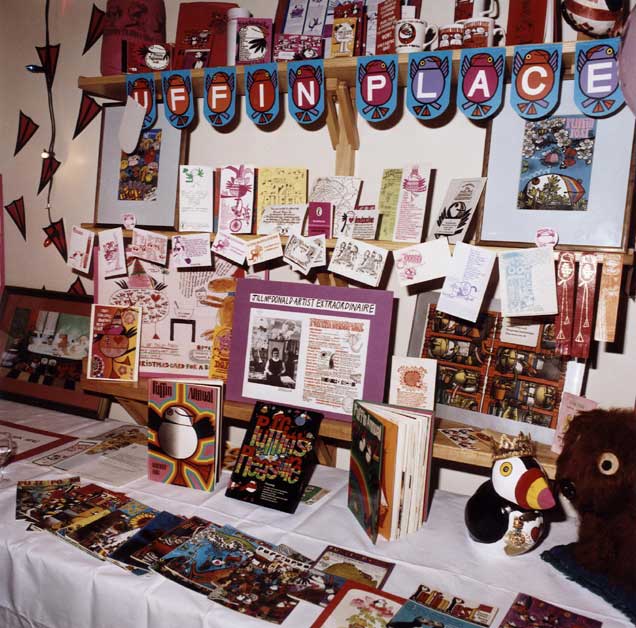 This picture was forwarded to me by Nick Campbell who used one of my restorations on a great article on Kaye Webbs biography.  His blog is well worth visiting and is very well written.

This is one of the pictures that have been placed online by the guys at Seven Stories.

This is a picture from the Kaye Webb Archive, and it is evidently a picture of a small part of the body of work that Jill MacDonald created in her time at Puffin.

I know that times are tough, but I would urge support of the work that is done at Seven Stories. The care of literature for children is so important. 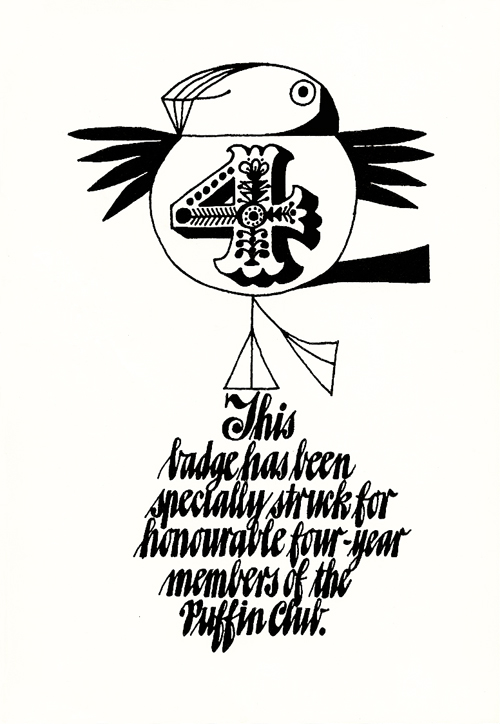 I received my Four year members badge attached to one of these, but it was so badly crumpled and torn by the badge that it eventually disintegrated. This is a nicely reconstructed one. Like the founders card, it’s about A6 in size. The badge, as regular visitors to the site will know, is black! And yes, I still proudly wear mine….pinned to my battered bush hat.

I love the treatment of the ‘4’! It’s something that Jill seemed to do without any effort.

I don’t know if the new club intends on doing the same thing. From what I’ve seen, it looks like the new badge changes colour each year.

Here’s the Founder card, purchased at great expense! Most of these were crumpled up, lost or just thrown away!

As regular visitors to the blog will know, I was pipped to the post by the author of ‘Puffin by Design’ for one of these a while ago, and it took a fair bit of searching, waiting, and just plain luck to get hold of this.

This one needed a fair bit of restoring to its current minty fresh look.

It’s a great example of Jill’s lovely calligraphy and a great way to see both styles of her graphic design work.

I was very touched to be contacted by Thomas Thurman who had his poem published in Puffin Post all those years ago. Thomas has continued with poetry and he has kindly allowed me to publish an excerpt from a more recent poem. I know that my interest in poetry was sparked by Kaye Webb and her championing poetry for children. For some of us it has become something more:

Thank you so much for your Puffin Club blog. It was a joy to relive some of the best memories of my childhood through its pages. I’m glad that they’ve started it up again so that the happiness will continue for another generation.I don’t usually explain these things, but in my sonnet “Two poems“, the sestet is about a poem of mine that Puffin Post published when I was eleven or so:

…I wrote another poem, as a kid
another paper bought it for a prize.
Ten thousand pairs of eyes saw what I did.
I wonder if, from all those pairs of eyes,
still, somewhere on this planet, I might find
some reader with my poem in their mind.

A big thank you to Thomas for allowing me to share his thoughts and his poetry with you.