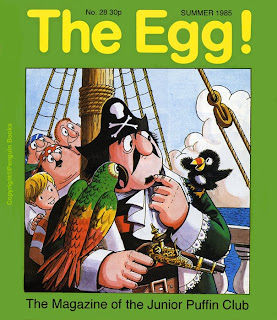 Sadly this august publication has not (as yet) been resurrected as this is a real favourite of my five year old. The cover, illustrated by Captain Pugwash creator John Ryan, features the mascot of the Junior Puffin Club – Smudge! Fat Puffin was supposed to be the Uncle of Smudge, though I remember this as something I was told at a Puffin event rather than in the pages of Puffin Post itself.

Apropos of the Puffin events, I remember a very nice little play area that had been set aside for the younger Puffineers and a very nice sounding lady inside a Smudge costume wandering around near it. Fat Puffin was of course doing the same elsewhere at the event, but it’s an image that has stuck with me.

I would be very interested if anyone out there has any Junior Puffin Club magazines and members memorabilia, as it is incredibly rare to find in any state of preservation – I only have a few copies and nothing else!!