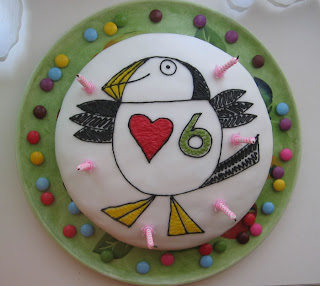 I admit this isn’t an original Jill McDonald work – it’s mine! My youngest daughter just turned six and requested a Puffin cake! (I don’t know where she gets it from!) My freehand icing isn’t the greatest, but here is my attempt based on the badge design by Jill.*

One nice consequence of doing this was discovering that the parent of one of her friends was also a member of the Puffin Club – now a teacher!

I was also contacted by another founder member who had come across this site – sadly she only had one letter from another member on club stationary as a memento. She also has a polaroid of her as a child in her bedroom with one of the (now very) rare Puffin Bookcases. These were a short run item that could be bought at selected Puffin outlets around the country. As far as I have been able to find out, these are excessively difficult to find as they tended to get thrown out when the Puffin books were outgrown – or didn’t survive moves.

I’m sure there are some still out there in varying states of repair – hold on to them! They are going to increase in value.

After careful consideration (despite asking permission), I have chosen not to post the picture, as I feel it would be inappropriate. I will locate one of the photos that were taken for Puffin Post as this shows it very clearly.

*I have removed my daughters name electronically for her protection! 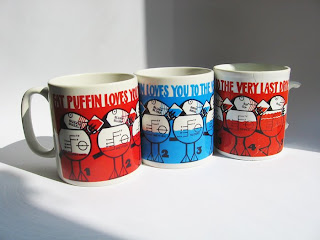 This is something I have wanted to do for a while!

My lovely puffin mug (the one on the right) that was accidentally smashed by my eldest when she was little (the restored graphic was one of my first postings!) and then stuck together with sellotape and modeling resin has been useless for anything other than storing bits and pieces – until now!

My youngest is quite taken with the whole ‘Puffin Thing’ and loves Fat Puffin, asked if she could make a different coloured image – easy on most image manipulation software – and then asked for a mug for her birthday. I finally sent both image files to the nice people at tshirtstudio.com who did a sterling job, turning it around in 48 hours!!

So I had the pleasure of drinking my tea from a treasured classic – as did my youngest!

Please don’t ask me to make these up for any of you! The copyright issues are hideous!!