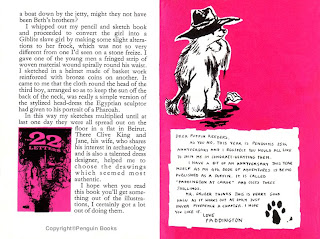 Not a lot to add to this! Apart from opportunity to see the pre-TV animation artwork of Paddington. It’s easy to forget that Paddington and the other famous furry animated figures, the Wombles, both had a a very different look before they made it onto the small screen.

If you can find a copy of the original versions of these classic books, you are going to be surprised.

I had to order a copy of the first Wombles book when I attended Primary school (from the Red House Book shop as I recall) – I expected the familiar faces from my teatime viewing! What a shock!! A load of teddy bears!!

Since posting this, I received a comment that I felt I had to share – “The book ’22 Letters’ obviously had a big budget! A trip to the Mediterranean! What were they paying him?” I’m afraid I have no idea – but at that time (though it may be hard to believe for younger readers) Lebanon was the playground of the rich and famous. As a young child I knew Beirut during the early ’70’s, and even though we were under constant threat of attack from all factions, it was still a very glamorous place to be, with an amazing sense of its ancient history present in every day life.
I like to think that a budget was found to allow the illustrations to be researched in this way – it couldn’t happen today!