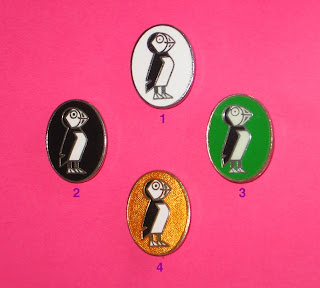 I’ve promised these for a while, so here they are! I found myself sitting next to Kaye Webb at one of the Commonwealth Institute Puffin Exhibitions and was stunned to see her sporting not just one, but three badges! I asked her how I could get them and where they were from.

She told me that the Gold Badge (no.4) was for founder members or those who had done something particularly special.

The Green Badge (no.3) was the members badge in Australia (though Kaye was wearing her Founders Green Badge that looked a bit like her Gold Badge.

The remaining badges are the standard White Badge (no.1) that I have found in different versions – The earlier badges were genuine enamel made by the Davis Badge company of London. Later versions were made with a plastic insert instead of enamel. (You will see a lot of these on ebay).

The last badge is the Black Badge (no.2) that was earned for being a member for four years – these were only ever made in enamel and the quality varied from well finished and ground to rough and distinctly ropey.

The members badge was of course the Puffin Logo designed by Jill McDonald when Kaye Webb became editor of Puffin Books in 1961.

Other classic button badges were made for the various events. I collected a pile of these and some survived better than others. Watch for these in future posts.

As a small addition – I have since learned that there was one solitary badge of gold that was made for club President, Yehudi Menuhin. This was a special gift from Kaye Webb. I assume it is still with the Menuhin family.